I NEED YOUR HELP!

Who can forget the imagery of the events of the EF-5 torndado that struck Joplin, MO last May.  When I turned on the news and saw it my first thought was "Joplin!!!  HOLY SHIT, THATS WHERE TODD IS FROM!"  Together we are pleased to announce Cycle for Joplin our vision of making the world a better place 1 storm shelter at a time.

Todd is an old baseball teammate and friend that lived around the corner from me on the Upper East Side.  He had lived in NYC for a decade but was always spouting off about this place called Joplin that none of us had ever heard of and quite frankly, didn't give a crap about at the time. Click the link above and you can read about how Todd and I are planning to make history one storm shelter at a time and kindly consider donating to help us turn this dream into a reality!
Posted by Central Park Fitness at 11:04 PM No comments:

Bootcamp is Outside TONIGHT!

It's finally here!  The moment you've been waiting for!  Bootcamp resumes outdoors in Central Park tonight at 7pm at the South Gate House of the Reservoir.  The forecast is to be a bit on the chilly side and windy so I strongly encourage you to wear a couple of layers that you can easily remove when you get hot.  (Notice I didn't say IF you get hot, but WHEN!)


It gets even better, between now and April 15th when you sign up for our monthly option you get your first month for just $99!  (Regularly $159)  That's less than $10 per class!

Posted by Central Park Fitness at 12:16 PM No comments:

I'm a diehard football fan.  Patriots fan to be exact.  "But Dave, isn't your company Central Park Fitness?  Your a New Yorker?"  Nope, not quite.  Born and raised in Brockton, Massachusetts, lived there for 24 years!  Don't ask me how I ended up in in NYC, we don't have that much time!  I love the city of New York but I have NO USE for their sports teams!  So a fan on my Facebook page threw out a little challenge and I'm always up for a challenge.  Patriots win and she would do 50 pushups and post video to the wall.  Giants win and I do 10 pushups with a Giants fan on my back!  Well you know how that played out!  Without further adieu!

Now Rachel isn't really a Giants fan but she's not really a Patriots fan either (she sort of roots for them because 1.she likes me to be happy and 2. she has a not so secret crush on Vince Wilfork!) but she is from New York originally so I guess that counts!
Posted by Central Park Fitness at 8:22 AM No comments:

Tools of the Trade

Just put another order in with

I know a lot of people really don't enjoy "lifting weights" so I'm always looking for creative ways to get people fit and make it fun!  Of course some people think I have a pretty twisted idea of what fun is!  The great thing about various training apparatus such as sleds, sandbags, kettlebells and ropes is that they allow us to train the body in natural positions and motions and to utilize the ENTIRE body at one time as opposed to typical strength workouts with lots of isolation movements.  The more of your body that you can use at one time, the more calories you will burn and the fitter you will be, not to mention you will improve your body's ability to work as a single unit.  The sum is greater than the whole of it's parts!  Sleds allow us to do heavy overload training to build strength, or lightly overload the body to build explosive power.  They can pushed as well as pulled and can have various harnesses and ropes attached to them.

Battling ropes are the ultimate total body conditioning too.  Weighing anywhere from 12-50+lbs depending on the length and thickness of rope, they allow complete freedom of movement for various muscle groups and instantly ramp the heart rate up through the roof to burn tons of calories and fat!

In the gym, most weights and machines are perfectly balanced and easily moved.  In the realworld, movement happens in 3 planes of motion and we don't always have perfectly spaced and balanced handles to grip things.  Sandbags really allow us to add a real world component to our training.  There is no better way to build functional strength and power than to be forced to move around "dead weight".

Kettlebells have really blown up in recent years as a great way to get in shape.  Shaped like a cannonball with a handle attached, they are great for training swinging type explosive movements.  The only downside to these tools are the learning curve involved in using them.  Like anything, they can help you get great results but there are some risks involved.  Private trainers like myself have led this revolution in fitness and many "big box" gyms have followed suit and now offer these types of tools.  If your tired of your same old workout routine and want to change things up, my Starving Artist Bootcamp will give you a taste of what these real world functional training is all about!

Posted by Central Park Fitness at 1:24 PM No comments:

Gotta get some fuel in me, another 50 degree January day means I'll be getting out on the golf course!  Oatmeal with raisins, strawberries, bananas and a little brown sugar (I only use about 1/3 of what they give).  The fruit salad looked nice and fresh today too and of course gotta have my coffee! 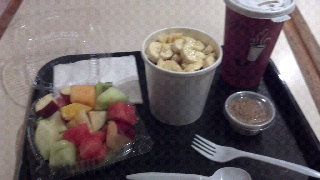 Posted by Central Park Fitness at 8:25 AM No comments:

The Great McDonalds Experiment Parts 2 and 3!

Happy New Year!  Holidays are always a busy time and my apologies for not posting in a bit!  I shot part 2 of my McDonalds experiment 5 days after part 1 and just shot Part 3 yesterday, 18 days later. Check out the videos to see how my burger is doing!


Posted by Central Park Fitness at 12:45 PM No comments: